Last week when I was making our grocery list, I was looking for meat on sale that I could cook for multiple meals this week to save cooking time.  I always get excited when pork roasts are on sale, because they are super easy to cook and there are multiple ideas for leftovers.  We’ve resumed school so I need recipes that I can put in the slow cooker in the morning and cook all day while we’re busy learning.  I also wanted to cook something that was going to go a long way so I could use leftovers for one night this week, and maybe even freeze some for another week.  It worked out perfectly.  I bought an 8 lb pork roast that was on sale this week.  I cut it in half and decided to immediately freeze half since it really doesn’t take much effort to cook it.  I took the other half and made this yummy recipe for bbq pulled pork that we had last night. 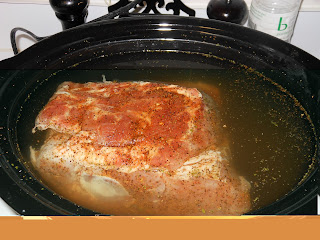 Mix ingredients for rub and use all over the outside of the roast.  Fill slow cooker about half way with water, a couple of onion halves, couple of celery stalk halves, and the roast.  Cover and cook on low for approximately 6 hours.  No need to open the slow cooker, but do be sure there is always liquid while the roast is cooking.

Once done, the meat fell right off of the bone as I was removing it from the slow cooker.  I simply pulled the meat apart with two forks.  I set aside a little for later this week, and added our favorite bbq sauce to the rest.  Last night we served our bbq pork over rice with sides of veggies and fruit.  For meal #2 later this week, I simply bought buns and we’ll have bbq sandwiches with fruit and veggies.  However, there are multiple options for leftover pulled pork:

I feel very accomplished that I spent very little with the pork on sale, and I got at least four full meals for our family of six.  There will probably be a little leftover for a few lunches as well.  Each meal will cost me less than $10!  I don’t know about you, but I LOVE slow cooker and make-ahead meals.  They make life so much easier, and allow for more family time!